Following last week’s post about the arts and craft TV programmes I’ve been addicted to over the last few weeks, I convinced the family to take part in ‘Life Drawing Live‘ on BBC4.  It was the second one in, what appears to be, an elongated series and I hadn’t seen the first one, but I didn’t think that would matter too much.  I have only really done life drawing once before at school, I think it was for A-level in Sixth Form, but it was a very long time ago and I could be wrong there.

Anyhow, it was a two hour programme where we had the tv on as well as a laptop, as we could see the model on the laptop and hence, take part in the drawing challenges.

I can’t believe how quickly the two hours went.  There was a series of tasks, starting with short timescales and gradually getting longer, while the model changed pose for each task based on a well known painting from the past.

I am by no means a particularly good sketcher and people have never been my strong point, but it was good to have a try, although being very self-critical, there are many many issues with the form, perspective and sizing!

So here are my first few sketches.

These were different poses and the task was the sketch them in a very short time, from left to right – 30 seconds, 30 seconds, 1 minute.  So not very much time to get anything on the page really!  I can just about tell they are people I think.

The next one was a reclining pose supposed to be on a chaise longue.  I think we had  about five minutes to do this one, and I was doing alright until my daughter knocked her drink all over the lounge carpet in the middle of this one, so this is the result of about two minutes sketching. 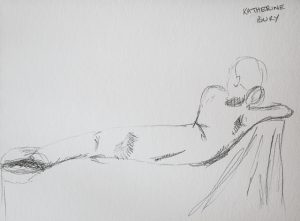 We were encouraged to switch from charcoal (I’d been using a 2B pencil) to a red crayon for this next pose.  Again I’m happy with the shape of the head and the right arm  but I was really struggling with the proportions.  Fun to use something other than a pencil though.

The next pose was a lady with a cello.  Back to pencil here and I think this was about 8 minutes or so.  I quite enjoyed this pose although she looks like a strange sort of bodybuilder and she really wasn’t! 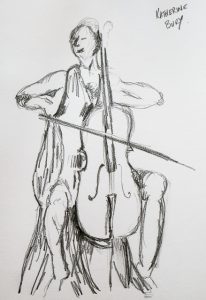 The Narcissus pose is possibly my favourite of all the drawings I did and arguably my most successful.  I was hoping to get to add his reflection into the water but didn’t quite get around to it in the ten minutes.  However, I think the proportions here are much more realistic than on any other.

The final pose was one depicting Liberty. The lady had had a mastectomy and was very courageous in both her pose and what she had been through.  She wasn’t as bony around her shoulders as she looks  but I have a little more perspective with the stance then I have in other sketches. I didn’t really do her justice, but it was a reasonable effort in the nineteen minutes we had. 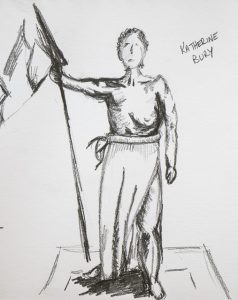 It was a great way to spend the evening, even if my results weren’t all that impressive.  I think I can see some elements of improvement over the course of the class and it was interesting to pick up some tips from the artists on the screen as well as seeing attempts by other people at home.

I was very aware of how long it has been since I picked up some pencils to do some drawing and I was feeling very rusty.  But the drawing pencils I have felt lovely to use again and I feel I really should do some more.  So I’m hoping this irregular series does have another episode in the not too distant future.

Maybe I will get around to having a go at drawing one of my cats one day. 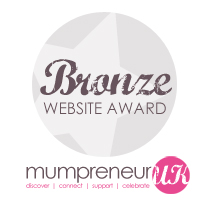